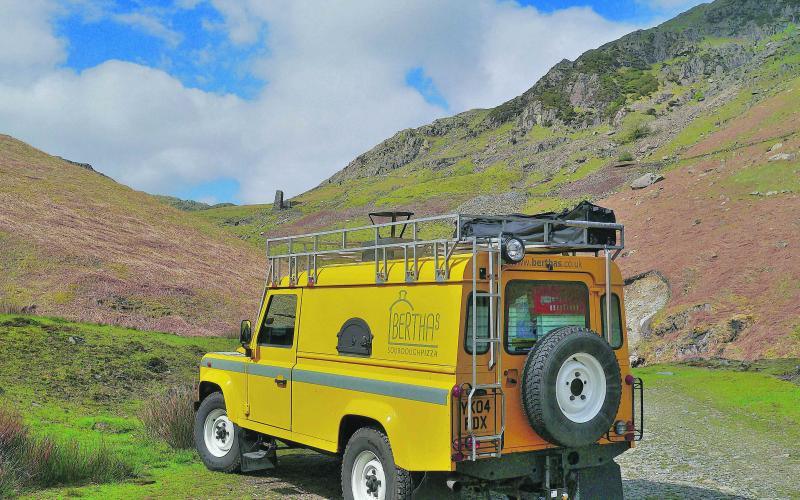 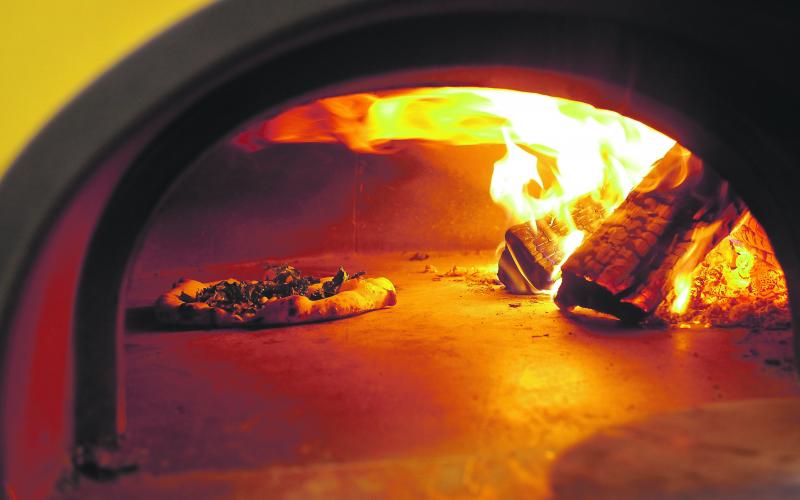 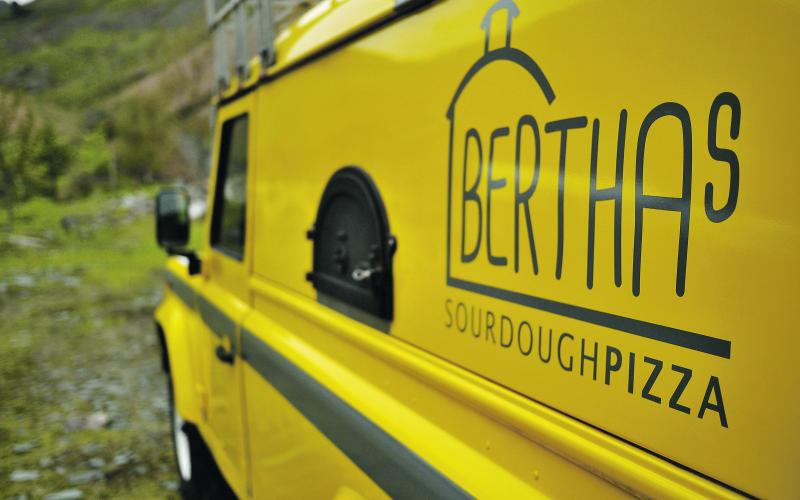 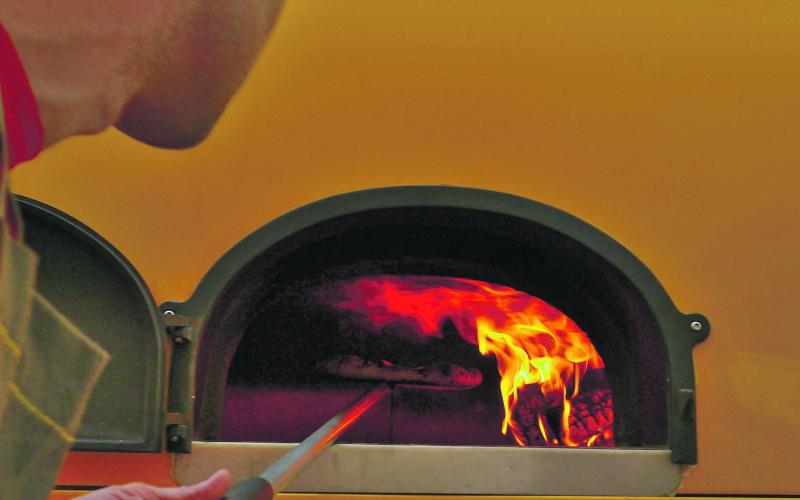 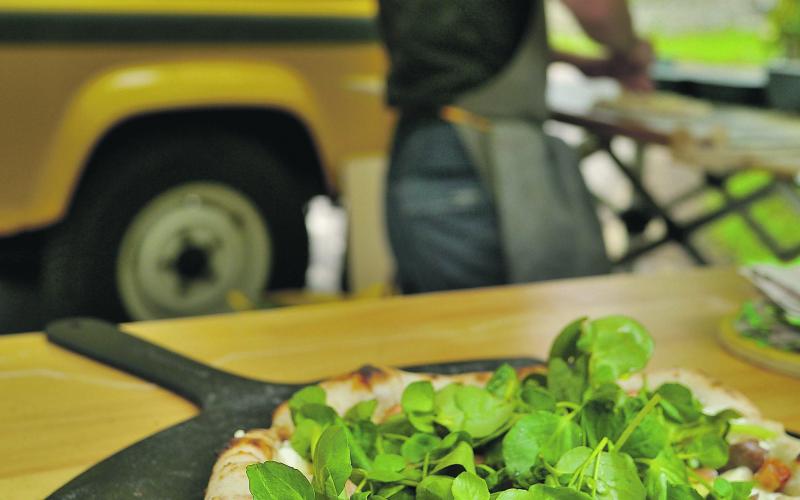 Graham Faragher’s Defender 110  Td5 is a bit different from your ex-council hard-top. It’s fitted with an optional extra that surely makes it unique – in the shape of a fully fledged half-tonne wood-burning pizza oven…

Graham Faragher made his first pizza while at university, many moons ago, using an upturned George Foreman Grill in place of an oven. Way back then, little did he know that one day he would be running his own catering business – let alone from the back of a Land Rover!

You might say the journey began in that student accommodation of his – in which case, we owe a lot to the art of procrastination – but really, the whole thing kicked off in November 2012 when Graham attended a food festival at Hampton Court. It was at this festival that he met some folks from the Garden Oven Company, who sold him an outdoor wood-burning oven. It was christened, you guessed it, Bertha.

Together with his wife Kate, during the months that followed Graham experimented with various types of dough, toppings and sauces, working Bertha to her full potential. He visited New York, Naples and, er, Flagstaff, Arizona, constantly baking and sampling, and his dream of owning his own pizzeria became fiercer than ever.

The heart of Bertha’s pizzas is in the sourdough, a bread product made from a long fermentation process. Graham explains that his ‘sourdough starters’, named Sanj and Clare after some old friends, are made from nothing more than flour, water and good few ounces of patience.

So where does the Defender come in, then? This is The Landy, after all, not Good Food magazine…

Well, at the break of 2014, the cogs in Graham’s brain were already whirring with ideas about launching a pizza-orientated business. The name came from his beloved garden oven. The only setback was how to get the pizzas to the punters. Enter Agricultural and Cross Country Vehicles Ltd (www.exmod.co.uk), which specialises in used Defender sales.

‘It took us an age to find our van, but these guys were absolute legends when it came to their after-sales service and whole approach,’ says Graham. ‘I couldn’t recommend them more highly.’

The team helped Graham to find the perfect vehicle for the business, which in the end turned out to be a canary-esque yellow 2004 Defender previously owned by Darlington Borough Council. Quickly christened Berthamobile, its new owner couldn’t seem happier with his purchase.

‘It’s a proper vehicle,’ he says. ‘As an engineer at heart, I love how accessible it all is. I’d take “rustic charm” over modern, plasticised features any day.’

Not only was Graham’s inner off-roader satisfied but, with the help of Essex’s Dragon Ovens (www.mobilepizzaovens.co.uk), Berthamobile was fitted with a half-tonne, wood-fired pizza oven in the back. We bet he went all doughy-eyed at the sight of it…

By April, he had left his job in the city and was dedicating all his time to the new business – now officially titled Bertha’s Sourdough Pizza. It had already become affiliated with Bristol Eats (or BEATS, if we’re being hip), which Graham describes as ‘Bristol’s street food collective, an affable bunch focused on bringing the best food, music and art to Bristol’s streets.’

As if they didn’t already have enough positives under their aprons, Berthamobile and Co have been doing their bit for the good of the planet, too. Not only are all the products used locally sourced (Isle of Wight tomatoes, anyone?) but links have also been formed with St Mungo’s homeless centre in Bristol, with the hope of using any leftover dough to make bread for the homeless. What’s more, one of their first events managed to raise more than £500 for charity Meningitis Now.

Running the business from the back of a Defender came in handy when Graham and Kate travelled up north to satisfy some stomachs at a wedding near the Lake District. ‘It was 295 miles of jostling with lorries in the slow lane, then five miles of bliss on a sheer gravel dirt track… the Landy came into its own,’ says Graham, his love of life on the road less travelled glistening proudly through.

So, where’s next for Berthamobile? ‘It turns out starting a business is a lot like lighting a fire,’ says Graham. ‘When the flames are roaring, when the idea’s established, things get easier. But we’re not there yet.’

The menu consists of several creatively named and delicious-sounding pizzas, i.e. ‘Take a Leek’, topped with mozzarella, charred leeks, capers and brown butter, and ‘Nettles’, a combination of mozzarella, fontina, creamed nettles and chilli. You don’t get recipes like that at Domino’s, that’s for sure: we reckon this bright yellow 110 is soon going to be pretty busy.

If you’ve got an event that needs catering, or just what to find out more about Bertha’s Sourdough Pizza, you can visit www.berthas.co.uk. Check out Graham’s blog while you’re there – it’s got tons of tips and tales from his journey setting up the business. And the pizza menu is sure to get your mouth watering…