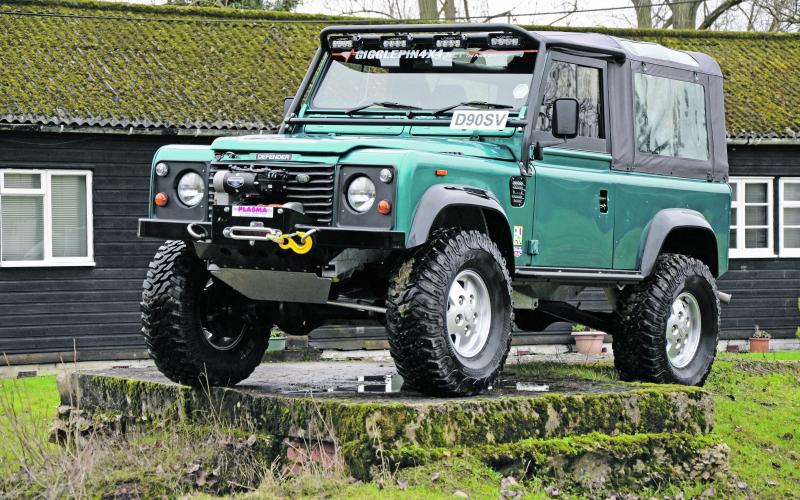 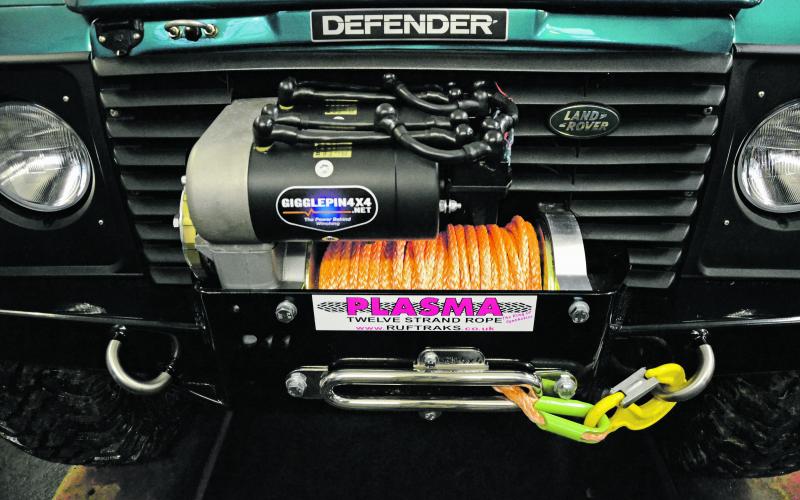 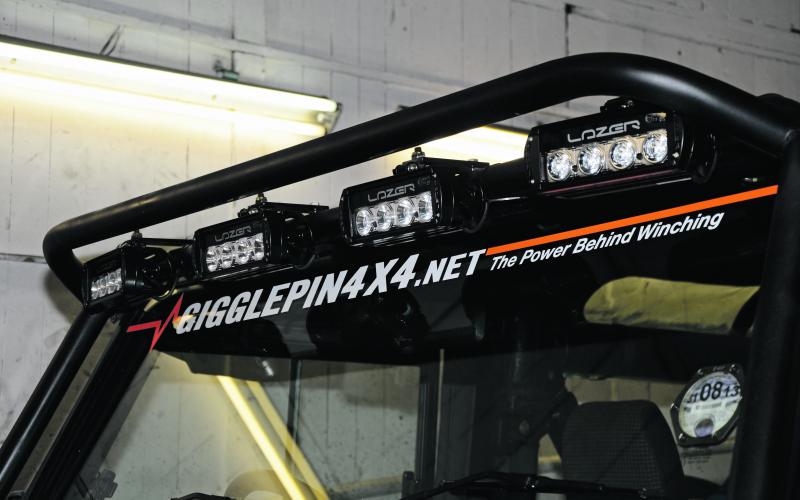 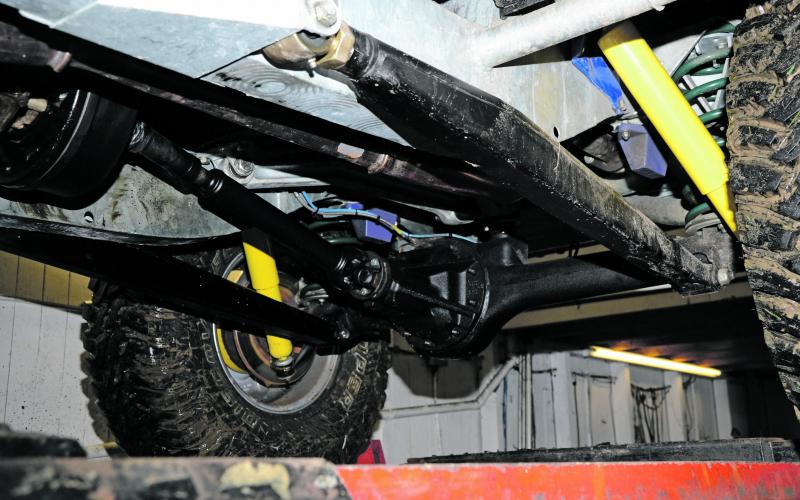 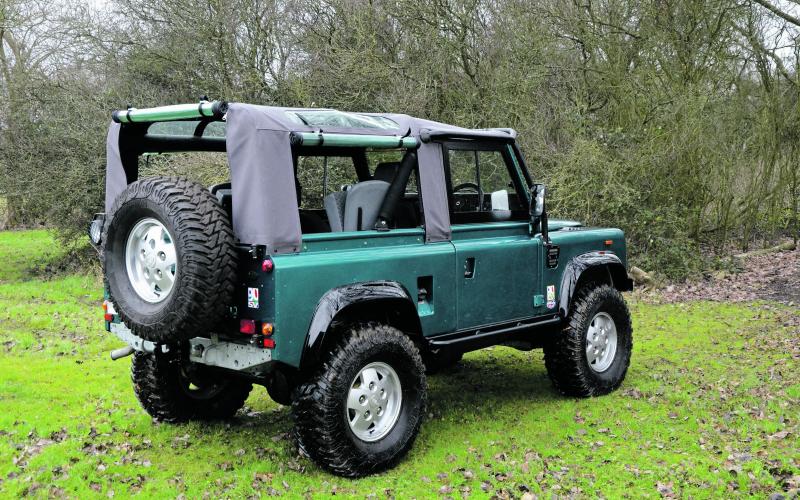 When Jim Marsden bought a 90 SV, little did he know that one day he would get into trouble with purists for using such a rare Defender in winch challenges. But even when he was driving it to a string of successes at the highest level of the sport, there was one thing he did know: that the day would come when he turned it back into a showroom truck. It’s just that his idea of a showroom truck was a bit more radical than Land Rover’s…

Jim Marsden has the rare distinction of having received hate mail for his activities aboard a Land Rover. No, not from ramblers: from Land Rover fans.

His crime was to use a Defender 90 SV in winch challenges. He didn’t just use it, either – he turned it into one of the most successful competition motors of its era.

Successful or not, though, it was a 90 SV. One of only 90 ever made. And not only was the SV rare, it was meaningful. Land Rover had long been making County versions of the Defender, but a full-on leisure vehicle had never been on the cards until this eye-catching soft-top came along. With alloy wheels and metallic paint, by the standards of its time the SV was a stunner.

It was still a good, basic Defender underneath, though – and between 2001 and 2007, Jim scored top three finishes in every major UK winch event, winning many of them outright. During those six years of competing, this Solihull rarity was dragged over more rocks and tree stumps than a hundred average Defenders will see in their lifetime.

The 90 was also used as the test bed for a wide range of products made by Jim’s company, Gigglepin 4x4, including its heavy-duty suspension arms and upgrades for the Warn 8274. But with an eye to competing abroad, in 2007 he built a new 90. For half a decade, the SV sat untouched by the sun’s rays.

Those five years saw Jim become one of Britain’s most successful motorsport exports. But he never forgot his 90 SV.

‘I always wanted to rebuild it,’ he says. ‘It’s a special car and it’s got a lot of memories for a lot of people.’

Around the start of 2012, he finally made the time. ‘I talked to my workshop guys and we decided we could rebuild the SV in a nine-week window, if we got on with it’.

Jim might have hammered the 90 in its comping days, but this was to be a pukka rebuild. ‘I’ve tried to be as sympathetic as possible,’ he says. ‘I didn’t want to just replace everything. If you try to refurbish the parts nicely, they’re right for the vehicle, and we’ve tried to do that as much as we can.’

A case in point was the bulkhead. ‘We sent it for shotblasting… and when we got it back, we could have cried. It would have been easier to order a new one – but I didn’t want to bin it. There were little things on it that to me, make it my bulkhead.

‘So I welded it up and sorted it out. A lot of it’s new – maybe it’s a bit like Trigger’s broom. But it’s back up and running. And it is the right bulkhead!’

The same went for the axles, which needed ‘some serious love’ to remain original. Perhaps the biggest job, though, was the rear tub. ‘The filler neck area was destroyed, and so was the whole of the back. Land Rover rear tubs are put together with spot welds, so I had to find a way of rebuilding it that wouldn’t mean using pop rivets.

‘Luckily, we found a body panel glue that’s absolutely fantastic. So I spent a long time with hammer and dolly, straightening panels, heat-shrinking, steam cleaning and setting it all up so it would fit with the other panels. It was very hard work. But I managed to save the cappings on one side – though the other one, well, most of it was missing.’

What a result, then, that several years previously he had bought a capping from his local Land Rover dealer. ‘You can’t get them any more. But I’d bought a genuine SV capping and it had been sitting on the shelves for years.’

All good, and it got better still. ‘I never competed in it with a full canvas on, but even so the original hood was destroyed. So way back, years ago, I phoned up my local main dealer and asked if they still had one.

‘He said “you’re not going to believe this, we’ve got one on the shelf. We ordered it for a customer years ago and they never collected it. We’ve looked at Land Rover Parts and they haven’t got one either.” I couldn’t not have it! Last SV hood in the world!’

‘So when we were doing the rebuild, I was very cocky about it. But we got the canvas out of the bag one day, laid it out on the floor… and saw that the mice had wanted it even more. There was a hole, more than a foot square, that had been gnawed in the front edge. I could have cried.’

At least this meant he had a template, though. So off the hood went to Kim at All Wheel Trim. ‘Now, the original SV hoods had poppers on them which were forever coming undone, and a pain to fit, and there are better systems on the market now. But I wanted it to look right – I don’t like it when they don’t have the right catches and stuff. So against Kim’s advice, we fitted poppers on it. And all credit to his hood – it’s that good that they fit bang on.’

Elsewhere, it was a case of moving through the vehicle and rebuilding everything that needed it. ‘You wouldn’t believe how many parts those seat boxes are made from!’ says Jim, having rebuilt them piece by piece. ‘I was gobsmacked that such a rusty old mess was salvageable, let alone into a good enough condition to be galvanised.’

However easy it would be to replace things, Jim reused whatever he could. The intercooler pipes went away to be passivated, and details like the bonnet catches and wing mounts were brought back. The wiring harness was unpicked and re-loomed, using conduit to keep it tidy, and even some of the brake lines were able to go again.

How can this possibly be the case on a truck that’s had such a hard life? ‘I was always quite religious in getting it clean. If you keep your car clean, your car will love you. It’s that simple.

‘So things we were expecting to be rotten and destroyed, we were finding they were actually in good order. Bolts came out when you wanted them to.’

Here comes some more good advice, too: ‘The timing belt, it’s meant to be changed at 60,000 miles. I did it every six to eight months, religiously. Water gets in, it goes for the idler bearings and it’s just not worth taking the chance. Anyone using one in anger every weekend, change that belt as often as you can.’

And guess what? The 90 is still running on its original engine and gearbox. That’s at twenty-plus years, six of them in winch comps. Get the point?

So, would the purists who sent Jim hate mail be more approving of the way his 90’s been restored? At the very least, you’d hope they’d accept that he understands the value of its’ parts originality. And he’d definitely used it the way Land Rover intended – and will be again.

‘I love it,’ he says. ‘Grin factor 10. It was the family car when I first bought it. My girlfriend and I, we took it everywhere. We travelled all over Europe in it.

‘People say it should be back to concours. To me, every Land Rover leaves the showroom and only then takes on its personality. And that 90, as it stands now, in my eyes that’s how the SV should have left the showroom. Bigger tyres, a little suspension lift, decent winch, good lights… that, to me, is how it should be, that’s my interpretation of the SV. That’s my special vehicle.’